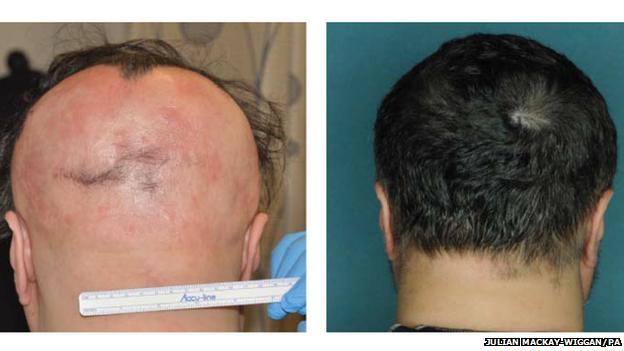 The patients had alopecia areata – a condition that can cause severe, patchy baldness that is difficult to treat.

But after five months of taking the medication ruxolitinib, all three saw total hair re-growth.

The findings from Columbia University Medical Center are published in the journal Nature Medicine.

Alopecia areata affects around two in every 1,000 people in the UK and is thought to be caused by the immune system attacking hair follicles.

The US scientists had previously identified a set of immune cells involved in the destruction of hair and conducted a number of successful trials in mice.

They then gave three patients with moderate to severe alopecia areata a twice daily dose of ruxolitinib.

This medication is already approved for use in bone marrow conditions in the United States and European Union.

All three patients had lost at least a third of their hair but saw dramatic hair growth within five months of therapy.

Lead researcher Dr Raphael Clynes said: “We’ve only begun testing the drug in patients, but if the drug continues to be successful and safe, it will have a dramatic positive impact on the lives of people with the disease.”

Prof David Bickers, a dermatologist at Columbia University who has treated many patients with the disease, said: “There are few tools in the arsenal for the treatment of alopecia areata that have any demonstrated efficacy.

“This is a major step forward in improving the standard of care for patients suffering from this devastating disease.”

Researchers say more work is now needed to see if the drug can be offered more widely.

Alopecia areata can occur at any age but is most often seen in teenagers and young adults.

It is not related to the more common male-pattern hair loss that is thought to be driven by hormones.

Scientists say as the mechanisms behind this condition are different, the therapy is less likely to prove effective for this more common problem.