What to do if you lose your locks I know how she feels because a similar thing happened to me a few years ago. I wanted the front of my hair to look thicker and longer so I went to a hair-extension stylist who’d been highly recommended.

At first it looked fantastic but about a month later the join between my own hair and the extension had become noticeable so I decided to have them removed.

That’s when it went wrong. It took several attempts to dissolve the glue that was holding them on but the chemical used to do this pulled out my own hair.

As I looked down I saw huge clumps, roots and all, in my lap. When I looked up in the mirror, I had no hair at the front.

Once the shock had worn off, I was devastated. But I also felt incredibly stupid. I hadn’t really looked into what could go wrong – after all, it was a just a hair treatment, not a medical procedure.

What a mistake – although my hair has partially recovered it never regained its original thickness.

Over the past few years, a number of celebrities, including Victoria Beckham, are said to have had the odd temporary bald patch after having extensions. Meanwhile, Jennifer Aniston has complained that having it done ruined the condition of her locks.

Stylists maintain that, if your own hair is in good nick and the extensions are properly fitted and maintained, they should be fine.

However, last year research
in the British Journal of Dermatology claimed that some women lose their hair within a week of having extensions and that even women with no obvious signs of hair loss had considerable underlying damage to the scalp when examined more closely.

The dermatologists – from the University of Miami in Florida and Bologna University in Italy – suggested that the problems are probably far more common than reported.

Traction alopecia tends to happen at the front of the head and around the temples, where the hair is weakest.

The extensions, which are attached by glue, weaving or braiding, put tension on the hair follicles, which become inflamed, causing hair to fall out. This is more likely if the extensions are heavy, left in a long time or fitted badly. Some glues can damage hair, too.

But any tight hairstyles like braids can have the same effect while harsh chemicals such as dyes, bleaches and straightening solutions further weaken hair.

If it’s caught early, it’ll grow back but the hair loss can be permanent.

HOW TO SAVE YOUR SCALP

Look out for small, red, sometimes painful bumps on the scalp, flaking or broken-off hair.

If there’s any damage or hair loss, have the extensions professionally removed and limit styling.

Ask your GP to refer you to a dermatologist who can confirm the cause of your hair loss and whether it may grow back. Regrowth can take three to six months or longer.

If the hair loss is permanent, a hair transplant, in which hairs from the back of the head are grafted on to the bald bits, is the only solution. Needless to say, you can’t get it on the NHS and it will set you back several thousand pounds, so make sure the doctor is registered with the General Medical Council and belongs to the British Association of Hair Restoration Surgeons (www.hairsurgeons.org.uk).

The clinic should be registered with the Healthcare Commission. Ask about the doctor’s experience and what realistically can be achieved. Also
ask to see before and after pictures of their patients.

That’s one way to create a buzz! Cheryl Cole celebrates her shoe collection by sporting her huge hair in gigantic beehive

She is making her first foray into fashion and tonight Cheryl Cole made sure she generated a buzz at the launch party.

The Girls Aloud singer stepped out with huge hair in a larger-than-life beehive style to celebrate her collaboration with online fashion site Stylistpick.

Teaming the massive hair style which she held back with a gold headband, Cheryl had donned a scarlet satin dress with rouched and draping detail as well as cut-out panels, showing off her slim figure. 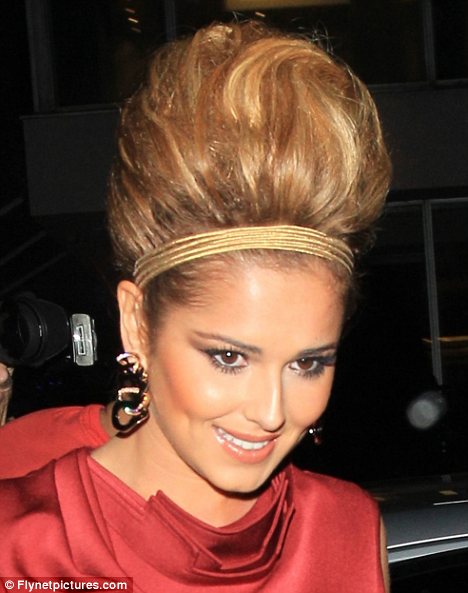 Huge hair: Cheryl Cole celebrated her shoe collaboration with Stylistpick at a party in London and the singer opted for a gigantic beehive for the occasion

And adding extra inches Cheryl had donned a pair of extremely high beige suede shoes.
Cheryl had posted a snap of herself enjoying a cocktail to her Twitter page and commented: ‘It’s shoe time.. Haha!

On hand to support Cheryl was her fellow Girls Aloud bandmate Nicola Roberts who also attended the event and the girls posed together inside the bash.

The pair had enjoyed somewhat of a band reunion last night with Sarah Harding and Kimberley Walsh, but notably the group was minus Nadine Coyle.

Cheryl’s first capsule shoe collection will be available from December, just in time for Christmas.

The collection forms part of a wide collaboration between Cheryl and Stylistpick, which will see her choosing her favourite pieces from the online accessory retailer’s monthly mainline collections and sharing style insights. 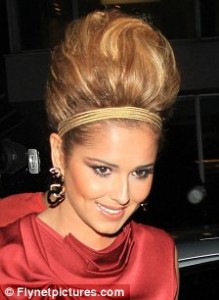 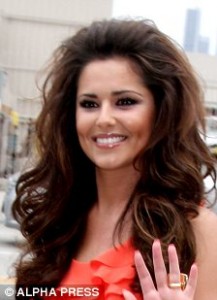 Bigger the better: Cheryl seems to be championing larger-than-life hair despite receiving criticism with her style choice at the X Factor U.S.A. launch in May

Stylistpick’s chief creative officer Juliet Warkentin said: ‘We are thrilled to be working with Cheryl. Cheryl is the style icon and is amazingly warm, a quality that has made her the nation’s favourite.

‘We believe that the launch will have a huge fashion impact; establishing fashion’s greatest influencer as a major force in fashion design and further democratising fashion.’

While Cheryl’s look for the evening demands attention what fashion critics will make of her big barnet will be interesting given the criticism Cheryl endured after she stepped out with huge hair at the launch of the U.S. version of the X Factor in May.

On me head, son

Top of the crops … Ryan Giggs’ barnet before and after treatment FOOTIE ace Ryan Giggs won’t need any hat tricks in the future – the Man United player was reported to be undergoing treatment to boost his barnet this week.

The Reds star, 36, is thought to be having laser sessions to thicken his receding locks.

And though the treatment may not be painful, it will cost the dad-of-two an eye-watering £6,000.But with seven in ten men affected by hair loss at some point in their life, what else can fellas do to battle baldness?

KATE WIGHTON spoke to the experts to find out…
Despite the thousands of hair loss cures touted in shops and on the internet, medics caution that only two treatments are known to be effective in treating baldness.

Both are available from pharmacies and studies suggest they work by thickening existing hair and preventing further loss.

Some fellas even experience hair re-growth but many don’t see the effects until four months after starting the treatment.

Hair will start to fall out again if either treatment is stopped, which can prove painful on your bank balance.

Laser
Giggs is believed to be having this controversial treatment at the Advanced Hair Studio.

But the chairman of Advanced Hair Studio, Carl Howell, claims there is good evidence to support the treatment.

He says: “We combine the laser treatment with a serum, shampoo and tablet.

“The laser stimulates blood flow in the area of the follicle. This brings the ingredients faster and more effectively to the hair.”

The treatment starts from £2,600 and requires two sessions a week for three months, followed by one a month for seven months.

Hair transplant
This procedure involves taking the hair follicles from the back of the head and surgically grafting them into bald patches on the scalp.

Asim Shahmalak, a hair transplant surgeon from the Crown Clinic in Manchester, says: “This procedure is for men who have lost too much hair to be helped by medication.

“For instance, someone like Alan Shearer – he has gone beyond medical help and should come to us for a hair transplant.”

He adds that one-in-ten of his hair transplant patients is a woman.
Artificial hair
According to Carl Howell, from the Advanced Hair Studio, most celebs opt for “strand-by-strand” replacement.

This involves covering a bald patch with artificial skin and implanting strands of donated human hair into it.

The hair is usually bought from women in Russia, though it can also come from India or China.

He explains: “The hair is generally from ladies who grow it long and sell it on.

“It has to be ‘virgin hair’ – not permed or coloured.

“The treatment ranges from £3,000 to £10,000. We create a second skin made from silicon and non-surgically graft it to the balding areas of the scalp.

“A client can have as little or as much hair as they want, but longer hair and certain colours are more expensive.

“And you have to come back for maintenance every month – it’s like going to the hairdressers.”

He adds that sportsmen such as Michael Vaughan, Graham Gooch and Shane Warne have had this treatment. IT’S Oscars time again.
And every year we eagerly await the stars’ grand entrance via the red carpet.

Sashaying elegantly and posing for the paps – oh to live the A-list life.

With stylists on speed dial, immaculate hair and pristine make-up we long to look just like our idols.

Well some of them anyway…

From Sandra Bullock’s cascading locks to Kate Winslet’s 50’s do, you don’t need an A-list budget to look a million dollars.

Goldwell and KMS have teamed up with the Vitality Show to recreate the key looks from the Oscar red carpet for you to copy at home.

Stylist to the stars, Michael Barnes, whose previous clients include Keira Knightley and Lily Cole, shows us his step by step guide on how to achieve glossy gorgeousness.

Kathy Ireland and Charlize Theron at the 2010 Oscars.

When it comes to Oscars hair, each year we see similar hair styles on different celebrities. Some of them nail it while others, um, don’t. Both Kathy Ireland and Charlize Theron wore this style to the 2010 Oscars. As you can see in the photo above, Theron looks gorgeous, while Ireland looks disheveled and overdone.

How can two styles based on the same underlying idea have such shockingly different results?

We turned to celebrity hairstylist Enzo Angileri for answers.

He created Theron’s Oscars look, and the key, he says, is to not leave anything to chance. “You have to remember gravity, and chance. Things fall, and you have to anticipate that,” he says. “You can’t know what her hair is going to look like when she gets there,” he says.

He relies on tried-and-trusted techniques to make sure hair stays in place. His mane tip: When drying the hair, he bends it at the roots, to direct the entire hair where he wants it to stay. Thanks to this process, “Charlize’s hair will only move ¾ inch from her eyebrow in either direction, he says.

The right technique, combines with trustworthy products (Anglieri uses ), will ensure your ‘do ends up a “do,” rather than a “don’t.”